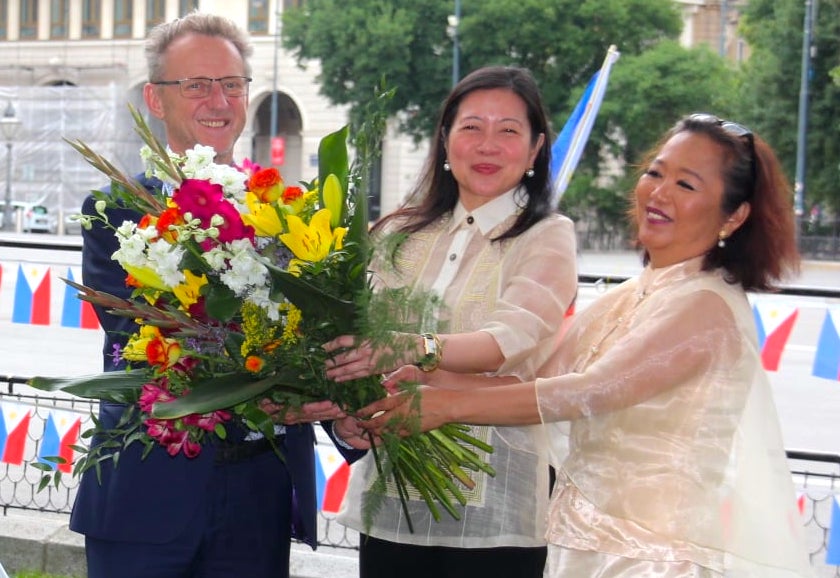 Together, Stronger. Stronger, Together!

The Philippine-Austrian Cultural and Educational Society (PACES) spearheaded a floral offering at the landmark Catalpa tree in the Vienna Rathaus to commemorate the 123rd Anniversary of the Proclamation of Philippine Independence. The flower offering also marks the 75th year of diplomatic relations between Austria and the Philippines, which will be officially celebrated in October this year. For the occasion, the Catalpa tree was resplendent, surrounded by Philippine flags waving in the gentle breeze.

This is only the third time such celebrations have been held since the tree was first planted in June 1998, during the Philippine Centennial Jubilee of Philippine Independence. This was the first time that Philippine migrants to Austria were honored as a group.

The event on Saturday, 12th June was graced by the President of the Vienna Landtag (Regional Parliament), Mr. Ernst Woller, representing Vienna Mayor and Governor Michael Ludwig. Philippine Deputy Chief of Mission and Chargé d’Affaires a.i. Deena Joy D. Amatong, and newly-designated Goodwill Ambassador Vincent Bueno, as well as representatives of various Filipino organizations, were also in attendance. PACES member Gina Villanueva-Weinzierl emceed the program and welcomed the guests, representatives of Filipino organizations, and supporters of PACES. She observed that despite being a young society that started in 2016, PACES has graduated four scholars in the Philippines.

Shortly after moving to Vienna, Ms. Villanueva-Weinzierl participated in the original tree planting on 5 June 1998, 23 years ago, together with her two children who are now grown up and fully integrated in Austrian society.

In fact, there are two Catalpa trees within a few meters of each other in the Rathauspark, since the Stadtgarten Wien (City Garden, Vienna ) planted a second tree as backup. These two trees fittingly symbolize the strong bilateral ties — diplomatic, political, economic, and cuitural — between two nations.

PACES President Ms. Maria Zelda “Marizel” Magistrado Rojas cited these ties in her welcome remarks, delivered immediately after the singing of the Philippine national anthem by the Our Lady of Peñafrancia singers. Ms. Rojas reflected that the Catalpa tree was the perfect choice because it produces white trumpet-shaped blossoms that herald many more years to a beautiful relationship between the two countries. The Philippines and Austria celebrate 75 years of diplomatic relations later this year. Ms. Rojas noted that the celebration in the midst of a pandemic is a timely reminder that as individuals, as families, as organizations, and as a nation we are stronger when we are together. She enjoined her kababayan (compatriots) to adopt the mantra: Together, Stronger. Stronger, Together!

Philippine Deputy Chief of Mission and Chargé d’Affaires Consul Deena Joy D. Amatong, speaking on behalf of the Philipine Embassy in Vienna, acknowledged the thriving and united Filipino community that has made Vienna its home. She expressed her profound gratitude to the Vienna city government, Mayor Ludwig and Mr. Woller for their decisive actions against the ongoing pandemic, noting that Filipino-Austrian frontliners have in turn demonstrated the country’s core value of service. Their selfless service and gentle nurturing upholds the legacy of the Filipino-Austrian nurses whe began serving in Austria in 1974. Ms. Amatong noted that as we commemorate the 75th year of Philippine-Austrian diplomatic relations, PACES initiatives to promote science and culture bolster the shared ethos of these two countries, bound by history and enriched by science and culture. In closing, Ms. Amatong thanked PACES and its members for advancing the shared goal of deepening Philippine-Austrian partnership.

The President of the Vienna Landtag (Regional Parliament), Mr. Ernst Woller thanked the Filipino community for their contributions to make Vienna a livable, secure, safe and a good place to live. Connecting with the aims of PACES, Mr. Woller noted that Vienna is known as a city of culture and science, as well as being an internatinal city with one of the seats of the United Nations and forty other international organizations. He further thanked the thousands of Filipino frontliners in the health care sector, who help to make Vienna’s, and more generally Austria’s, health care system one of the best for tackling the challenges of the pandemic. Coincidentally, this echoed the sentiments of then Mayor Michael Häupl at the 1998 tree planting when he lauded the contributions made by Filipinos, particularly to the Austrian health care system. It will be recalled that Filipino nurses were among the first Filipino immigrants to Austria, having been recruited to bolster the Austrian health care system.

PACES President Marizel Rojas presented a medal to Mr. Vincent Bueno , designating him as the first PACES Goodwill Ambassador. Mr. Bueno, Austria’s representative to the recent Eurovision Song Contest 2021, is a living exemplar of the fusion between Philippine and Austrian cultures, having grown up in Austria to a Filipino family. Wearing an elegant Barong Tagalog, he was accompanied by his parents, wife and children, making three generations of a Filipino-Austrian family at the event. Accepting the appointment, and speaking fluently in English, German and Pilipino, the multi-talented performer thanked his parents for raising him in Vienna in the Filipino way with the values and traditions of Filipinos.

Filipino-Austrian siblings Robin and Annabelle-Rose Roda delighted the audience with their interpretation of the Filipino folk dance Cariñosa as a way of honoring their Philippine heritage and revealing the unique Philippine culture. Learning this dance from their elders is a way of preserving the Philippine culture and passing it on to the next generation. These young children are direct descendants of the much-beloved Johann Strauss the Elder, epitomizing the integration of Filipinos within Austrian society.

Vice-President Franz Berner, before introducing the closing performance by the Agbon family singers, said it always amazes him how well Filipinos and Filipinas know how to celebrate important events, and thanked all those who participated on this day. For the finale, Austria´s Rock Diva Nancy Agbon with daughter Gilyn Annadel and son Jarod Matthew had the audience singing along with their stirring rendition of the patriotic song Bayan Ko (“My Country”). This was followed by an impromptu performance of Anak Dalita (Child of Sorrow) by Ms. Agbon and Mr. Tony Bueno. This tune is regarded as the first Philipine art-song kundiman (love song) by Francisco Santiago, who is called the Father of Kundiman Art Song.

The floral offering ceremony was organized by PACES in line with the society’s aim of promoting cultural exchange and friendship between the Philippines and Austria.

More coverage of the floral offering can be found in social media channels: