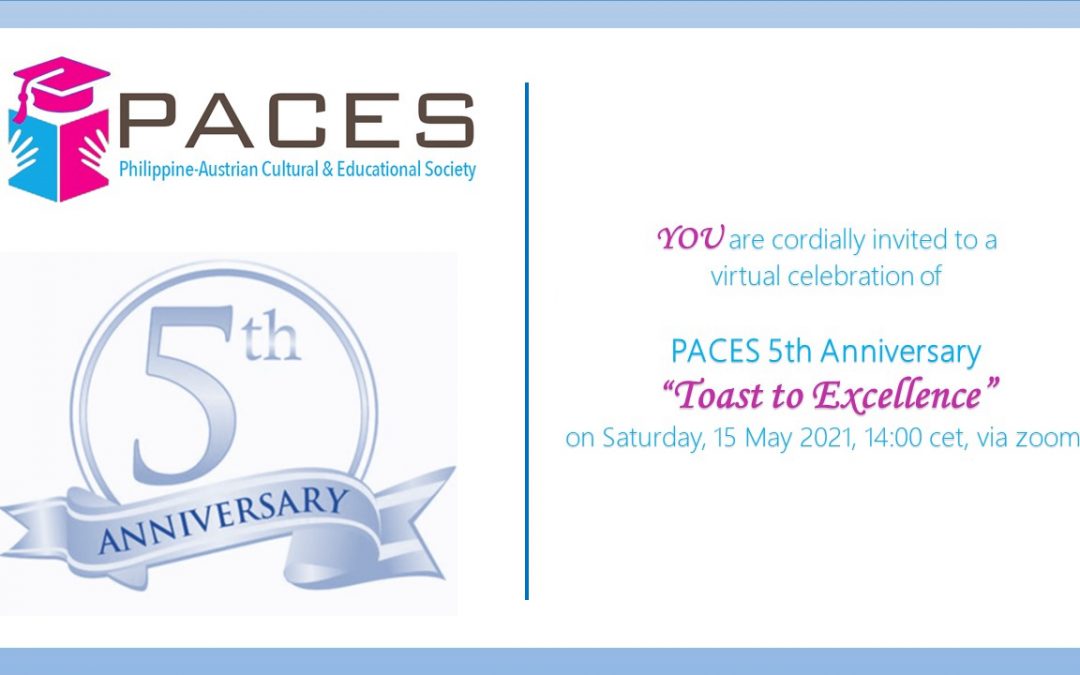 Founders, members, supporters and former scholars of PACES came together in a “Toast to Excellence” on the 15th of May 2021 to mark its fifth year anniversary. The virtual celebration was spearheaded by PACES president Maria Zelda (Marizel) Rojas and emceed by former Vice-President Gina Villanueva-Weinzierl, who is an educator in Vienna.

In her welcome remarks, Ms. Rojas highlighted the accomplishments of this relatively young organization. These include:

Former Philippine Ambassador to Austria Maria Zeneida Angara Collinson joined in from Australia with an inspirational message. She fondly recalled gathering some members of the Filipino community in Vienna beginning in 2015 to eventually create an association that would support scholarships in the fields of Science, Technology, Engineering and Mathematics (STEM). Ambassador Collinson described PACES as a cherished brainchild born in the belief that the educational mandate rises above all others. For this, she is fondly remembered as the founding ambassador of PACES, which was formally registered as an Austrian “Verein” (society) beginning in 15 May 2016.

As if to illustrate the challenges faced by students in a developing country, even at the time of this online celebration, one of the scholars needed to travel to another house to get a better Internet connection, and another scholar joined late because electric power in her home had just come back after one of the scheduled blackouts (or brownouts, as they are called in the Philippines) that continue to afflict their community.

Dr Efren Abaya, Chairman of the Scholarship Committee, commended all the scholars for their perseverance in surmounting obstacles in their academic and personal lives to pursue their personal dreams. First Secretary and Consul Ma. Carmela Teresa “Tinky” A. Cabreira, representing the Philippine Embassy in Vienna, spoke of the Embassy’s focus to promote STEM studies among Filipinos, and in pushing for greater participation of women in STEM fields. This is in keeping with the Philippine Embassy’s role at the forefront of science diplomacy in the Philippines. She noted that the work of PACES gives much needed hope and inspiration in these times, and shows what a group of determined and like-minded individuals can do to change the world one life at a time. In closing, she exhorted the scholars to “pass it forward” through public service or by going into international organizations, referring to the standing of Vienna as one of the major hubs of diplomacy in the world.

PACES Treasurer Nilsa Fischer led the participants in a virtual Toast To Excellence reminding the scholars of their responsibilities with a quote, “Kayo ay hindi lang basta iskolar ng Bayan, kayo rin ay mga iskolar para sa Bayan.” (You are not just scholars of the people, you are also scholars for the people.) Past President Maria Lourdes (Malou) Reininger thanked various supporters and partners of PACES, including ANCOP (Answering the Cry of the Poor) and Jugend eine Welt. She mentioned that, through one of these partnerships, PACES now has the possibility to receive tax-deductible donations.

Several participants also gave congratulatory messages. Dr. Jane Gerardo-Abaya left the audience with three words to remember: “Patience” in pursuing a professional career, “Perseverance” in the face of setbacks, and “Service” with humility and without hesitation. A young member of PACES, Ms. Sarah Jozelle Rojas, spoke of being inspired on hearing the struggles of Filipino students. For example, she said she could not imagine what it would be like to wake up in Vienna without the necessities of life, like electricity.

Vice-President for External Affairs Franz Berner, a media specialist, closed the program with a cautionary reminder that this time of pandemic shows how important it is to distinguish fact from fiction. He said that, in these times, it is even more important that we have scientists to solve essential problems, and that we stick to facts and science. The program ended with a video rendition of “A Million Dreams” sung by the “Rock Diva of Austria” Nancy Agbon, providing a fitting finale to the celebration of a vision borne five years ago to help deserving Filipino students fulfil their dreams.