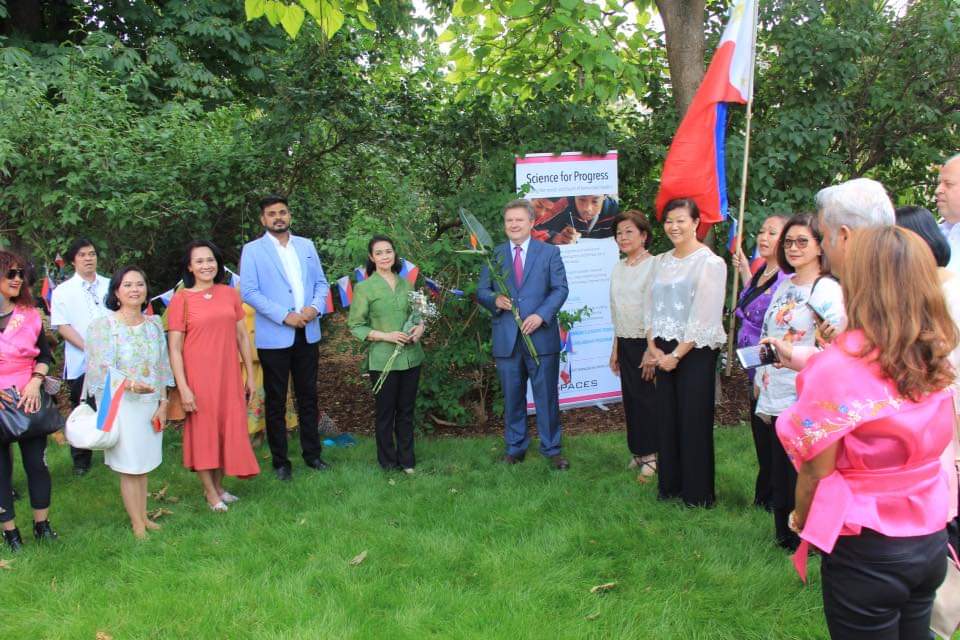 The Philippine-Austrian Cultural and Educational Society (PACES), in line with one of its aims of promoting of cultural exchange and friendship between the Philippines and Austria, organized a flower-laying ceremony as its contribution to the celebration of Philippine Independence Day in Vienna.

It was a balmy and sunny Friday on June 12, 2020, when members, leaders and representatives of the Philippine-Austrian community in Austria made their way to the Rathaus Park in Vienna, to the site of the Catalpa tree which was planted 22 years earlier during the celebration of the Centennial of Philippine Independence in June, 1998.  Gradually, but with slight trepidation due to the measures implemented as a result of the CoVid-19 pandemic, the crowd gathered inside the fenced area decorated with Filipino flag banners and several large Filipino flags, mounted earlier by highly-motivated Philippine-Austrians.  As the participants awaited the special guests, Philippine  Ambassador Maria Cleofe Natividad and Mayor/Governor of Vienna, Dr. Michael Ludwig, singing and picture-taking took place, even while observing social distancing, with some guests even opting to wear masks.

At three o’clock in the afternoon, Mayor Ludwig arrived, and graciously greeted the Filipinos who quickly gathered around him.  The enthusiasm that greeted him was clearly appreciated by Mayor Ludwig as well as by the head of the Mayor’s office who accompanied him, Dr. Margarete Grießler-Hermann. Several times, the warning and reminders of “one meter distance” were called out, but these did not dampen the spirits of those present.  Ambassador Maria Cleofe Natividad arrived shortly after, accompanied by the Philippine Embassy’s Cultural Officer, Ms. Kathrine Camille Cruz. She was greeted likewise with warmth and enthusiasm by the crowd.

The start of the formal program was the Invocation delivered by Mr. Anson Samuel from the Archdiocese of Vienna, followed by the singing of the Philippine National Anthem.  Thereafter,  Ms. Maria-Lourdes Soto Reininger, PACES president, delivered the welcome address.  Spearheading the planning and implementation of the Catalpa planting ceremony in 1998 as well as the present flower-laying in 2020, she traced the history of the Catalpa tree, which was planted and dedicated to the first Filipino migrants who came to Austria and future generations, who have planted their roots in Austria. In 1998, then Mayor of Vienna Dr. Michael Häupl and Ambassador of the Philippines Jose Zaide presided over the ceremonies.   (Incidentally, a twin Catalpa tree was planted by Stadtgarten Wien (City Garden Vienna) a few meters beside the first one, to ensure that in case the first one did not survive, another one could take its place.  The two Catalpa trees, however, survived!) She reiterated her appreciation to the Mayor for the cooperation the City of Vienna has accorded the Philippine-Austrian community, and thanked Amb. Natividad for her ever-ready support of the Filipino community in Austria and on this occasion.  She also mentioned PACES’ goal to promote science and technology in form of scholarships as a key to a nation’s progress, and her hope for further cooperation between PACES and the City of Vienna.

In her opening speech, Ambassador Natividad expressed her appreciation and thanks to the City of Vienna, represented by Mayor/Governor Ludwig, for its generosity and cooperation.

“We are very much honored that in spite of your tight schedule you came here to be with us,” Ambassador Natividad thanked the Mayor of Vienna.

“This occasion is very special for us….the very first time, a lot of us are out after the three month long lockdown, after the pandemic and after the quarantine.  It is also special that the very first time we are gathered, it is to celebrate our freedom not only from a former colonizer, but freedom from poverty, freedom from any kind of disease, which we are able to enjoy in this beautiful country and city of Vienna.”

In preparation for the Philippine Embassy’s and Philippine-Austrian community’s intended celebration of the 75th year of diplomatic relations between Austria and the Philippines, she announced her hopes of further cooperation with the City of Vienna in the implementation of the various activities in 2021.

In his response, Dr. Ludwig expressed his thanks to the Philippine-Austrian community for its service in the health sector, especially at this present time of the pandemic.   Mayor Ludwig, in congratulatory speech, thanked the Philippine nurses, scientists and medical personnel, who chose to work in Austria.  He praised the importance of their work, especially in the very good system of health care in Austria.  In referencing the Catalpa tree, the mayor mentioned that his predecessor planted the Catalpa tree 22 years ago.  “Perhaps”, he mused, “we can plant another tree 3 years from now, 25 years after the first tree-planting.”

The ceremony ended with the Oath of Allegiance to the Philippine flag, and community singing of “Bayan Ko”,  a song to which an emotional and patriotic crowd joined in.

It was a short but memorable event, full of friendship, patriotism, and, gratefulness in being able to celebrate Philippine Independence day outdoors at the historic Catalpa site, with two very special guests, despite the recent pandemic restrictions.  Unlike the original planting of the Catalpa tree in 1998, there was less fanfare, but it was equally significant.

We are looking forward to the next flower-laying celebration on June 12, 2021. SAVE THE DATE!

See below for more photos of the event.