Veteran Filipino seismologist, Dr. Baby Jane Punongbayan was the featured speaker at the PACES lecture series on the topic Preparing for the “Big Ones”: Let’s talk about earthquakes and earthquake readiness in the Philippines. The lecture – the fourth in a series of PACES lectures on science and technology – was held on February 4, 2020 at the Vienna International Centre.

Dr. Baby Jane Punongbayan started her lecture by showing how earthquakes are generated.

She explained that forces deep within the earth push out material from its core to the surface with heat and force, This produces volcanic activity and move the plates on which continents sit, resulting in earthquakes.

The Philippines sits right at the boundary between two colliding plates, and is therefore characterized by numerous earthquake fault lines throughout the country, as well as active and inactive volcanos, Dr. Punongbayan pointed out.

During her lecture, she showed several maps which showed the multiplicity of earthquake and volcanic hazards all throughout the Philippine archipelago. She then outlined the types of seismic hazards from earthquakes that people should be aware of. These include:

Dr. Punongbayan delved into these serious topics with wit and humor. She continued by giving out detailed official advice from PHIVOLCS and disaster management agencies, as well as practical tips on what people in earthquake prone areas can do to protect themselves before, during, and after an earthquake. 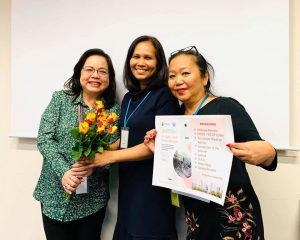 Dr. Jane Punongbayan is an Associate Analyst with the Comprehensive Nuclear-Test-Ban Treaty Organization (CTBTO) in Vienna, where she helps analyse seismic, hydro acoustic and infrasound events. Before that she was the Supervising Science Research Specialist at the Philippine Institute of Volcanology and Seismology (PHIVOLCS), where she spent more than 22 years monitoring earthquake and tsunami events, and disseminating knowledge of disaster risk reduction and disaster preparedness among local government units, educators and the general public.

She was also active in ground-shaking hazards mapping and in the establishment of community-based, early warning systems in several provinces of the Philippines, which usually culminated in community-wide seminars and tsunami evacuation exercises. Under a Japan-Philippines collaboration, she was instrumental in the establishment of the Philippine Tsunami Monitoring Network consisting of 19 stations. One of her international collaborations included the electromagnetic studies of Taal Volcano. 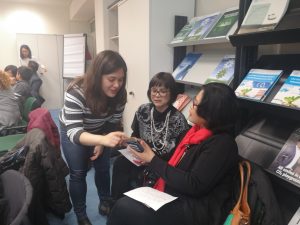 Prior to the main lecture, the attendees took part in a hands-on pre-lecture activity using their smartphones to run an online tool called HazardHunterPH. The app was developed by GeoRisk Philippines, under a multi-agency initiative led by PHIVOLCS with the participation of several government institutes and agencies. This tool, launched in 2019, generates indicative hazard assessment reports on a user-specified address within the Philippines to answer questions like: 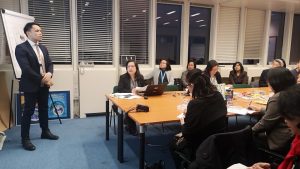 A second pre-lecture activity enabled the attendees to gauge the earthquake-preparedness of their homes in the Philippines by answering a self test called How Safe is Your My House? This self-test was prepared by PHIVOLCS in collaboration with various Philippine agencies.

Peregrine Marco “Perry” Duran, with the assistance of Lucille Fatima Sia, Razaile Elaine Besa, Christine Maria Sia, and Jamina Jugo guided the audience through these hands-on activities. These were well appreciated by the attendees, many of whom have families and properties in the Philippines.

Dr. Punongbayan’s lecture on earthquakes is the fourth in a series of lectures on science and technology organized by PACES. This is also the second time that PACES and the VIC Club Filipino have collaborated on a lecture. 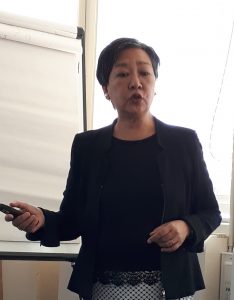 The first was in June 12, 2019, during a lecture which featured Dr. Jane-Gerardo-Abaya who, in her personal capacity, spoke on the topic “Nuclear Technologies & Sustainable Development Goals (SDGs)”. The lecture was number three in the PACES lecture series and happened to coincide with Philippine Independence Day. The lecture demystified the role of nuclear technologies in our daily lives. Dr. Abaya works for the International Atomic Energy Agency (IAEA).

The President of VIC Club Filipino, Concepcion “Bong” Segura welcomed participants on behalf of both organizers. In her remarks, she recalled some of the deadliest earthquakes which have hit the Philippines in recent times.

Gina Villanueva-Weinzierl, PACES Vice President for external affairs, delivered the closing remarks, thanking the organizers for another very successful and informative collaboration between PACES and the VIC Club Filipino, in the service of the Filipino community in Vienna.

The next (fifth) PACES lecture is scheduled for 20 February at the Wirtschaftsuniversität Wien in Vienna’s 2nd district. It will feature Dr. Richard Mischak who will speak on the topic “My Boss is an Algorithm.”