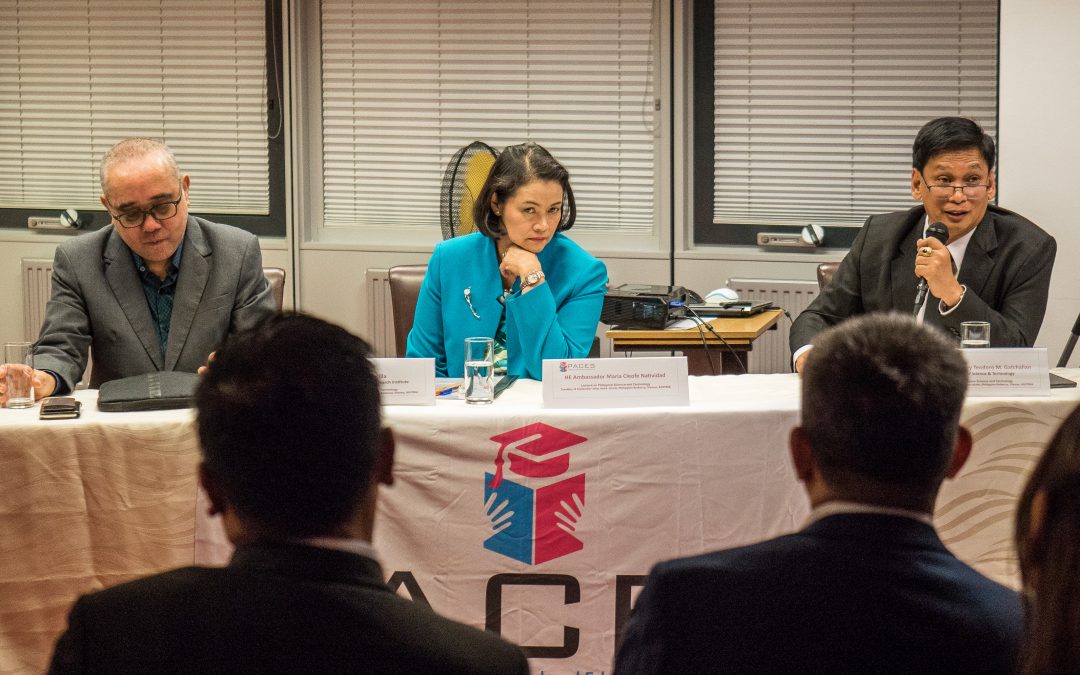 A good mix of young professionals, student, civic leaders and science enthusiasts turned out for the inaugural lecture of the PACES lecture series which was held on 18 September at the Multipurpose Hall of Philippine Embassy in Vienna. The lecture featured two prominent scientists from the Philippines as speakers: Dr. Teodoro M. Gatchalian, Assistant Secretary for Administration in the Department of Science and Technology (DOST) and Dr. Carlo Arcilla, Director of the Philippine Nuclear Research Institute (PNRI). In their presentations, Dr. Gatchalian and Dr. Arcilla highlighted the role of science and technology in the Philippines.

In welcoming both speakers and the audience, PACES President Malou Reininger said that PACES is promoting the study of science, technology, engineering and mathematics (STEM) as a way to contribute to the development of the Philippines. PACES is currently providing scholarships to four science and technology students in several Philippine universities. 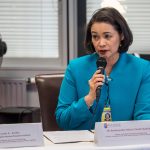 In her opening remarks, Ambassador Maria Cleofe Natividad underscored the important role that science and technology will continue to play in the lives of Filipinos. Ambassador Natividad shared her pleasure that the Philippine Embassy in Vienna was able to host the inaugural lecture of PACES as it aligns with the mission-vision of the Philippine Embassy to become the science diplomacy hub of the Philippine Foreign Service, using its unique proximity to science centers in Vienna and in the neighboring countries in Europe, as well as the very strong community of Filipino professionals working in Austria. 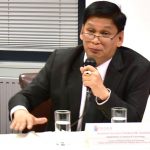 Dr. Teodoro M. Gatchalian then delivered a presentation on “The Role of Science & Technology in the Philippines.” He spoke on the mandate of the DOST and about its Science for the People Strategic Plan 2017-2022 which outlines strategies to harness science, technology and innovation for maximizing the country’s potential growth and laying a solid foundation for sustainable socio-economic development.He presented DOST programs such as the improvement of native animal stocks such as pigs, ducks and chickens; carageenan as an agricultural supplement to improve production of rice, mungbean and peanuts; identification of organisms that can be natural sources of medicines; three space satellites for earth observation (two already launched into orbit) developed by DOST researchers, and a hybrid electric train being tested for the Philippine National Railways. 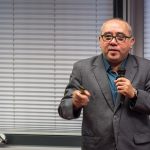 Dr. Carlo Arcilla’s presentation focused on “Nuclear Science Applications in the Philippines”. He described the use of irradiated carageenan (a seaweed extract) as a plant growth promoter that could alleviate rice shortages by increasing the productivity of rice fields by up to 30%. This technology, developed by a team of researchers in PNRI has been successfully pilot tested in several regions of the Philippines. Irradiation facilities of PNRI, he said, are being used to increase the shelf life of rice and other foods, and to sterilize food products intended for export to meet import requirements in the destination countries. Both of these measures can increase the capability to sell Philippine products abroad.

On another front, Dr. Arcilla also reported on the success of Project NOAH (Nationwide Operational Assessment of Hazards) in mitigating property damage and loss of lives from flooding and debris flows, which are common in the Philippines due to typhoons. Project NOAH utilizes science and cutting edge technology to provide real-time information to provide timely warnings hours in advance of potential flooding. In four years, NOAH has saved thousands of lives by providing warnings in advance of incoming floods, Dr. Arcilla said.

A lively question and answer with the audience followed the two presentations. 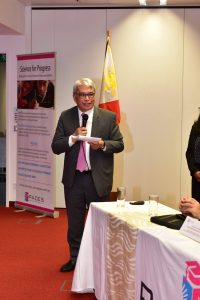 In closing the lecture, Deputy Chief of Mission and Consul General Sulpicio M. Confiado (now Ambassador-Designate to the Arab Republic of Egypt) shared three salient points. He said there is a a growing Convergence between PACES and its partners in the vision that Science & Technology shall be the key drivers for Philippine development. This Convergence should lead to a sense of Stewardship in each Filipino about our collective responsibility and mission to share generously the fruits of scientific knowledge and application to everyone, especially the less privileged and marginalised communities. Finally, Convergence and Stewardship should lead to active Engagement. He called upon those present to support the mission of PACES or to undertake similar initiatives to bring the benefits and fruits of S&T right into the homes of every Filipino family & community.

The PACES lecture series was conceived to aid in the dissemination of scientific knowledge and information of relevance to Filipinos and Austrians in Europe, to promote awareness and appreciation of the scientific abilities of Filipinos abroad, and to inspire the younger generation of Filipinos towards career possibilities in the fields of science and technology. More lectures featuring leading figures in the Philippine scientific community are planned in the coming months.

A more detailed report of the pilot lecture is also available for download and further reading.